I finally got a new camera after weeks and lots of frustration of trying not to spend more than $100 for a camera.
I searched Amazon, Overstock, Ebay, Target, Best Buy, Frys and Craigslist for a new digital, point and shoot camera that was new and would hold up to my now relentless need to hold a camera.

First off, Why didn't I get an Android or iPhone ?
Well, I have issues with people using their phones
like this 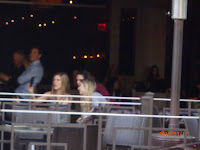 I think it is rude and obnoxious and I really really do not like it because I am enjoying my meal and this yahoo here is yammering at the loudest voice possible. Do you see the scene she is making? There is two sets of people actually being entertained by these antics similar to that of a six year old on the phone with grandma.

I know, I know technology is great and I am being a fuddy duddy but how many times have you accidentally texted your boss the photo from last nites dinner party. I did it once and swore never again.

Next, I take horrible pictures regardless of technology so putting said photo snapping device in my hands is just not good for me or the subject. Seriously, I take pictures of the ground like its a new art form. 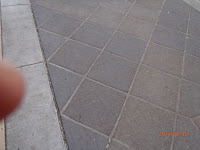 I know I know I shouldn't even bother to mention it but yes that is my thumb also in the picture. I am a hopeless mess. it was a little outside my price range except I found an ad on craigslist for $80 and I was going to meet the guy outside on the corner of San Fernando and 10th to get it.

Now, I know $80 cameras don't come without some strings but I figured I would check a local pawn shop before I drop by a street corner near the police substation for SJSU.

Thus why I now own a Canon Olympus TG 610 and realized its not the camera but me taking the pictures. You see I actually got this great device for half of retail ...yes that is over my $100 limit but its practically brand new and while it didn't have an SD card I still was able to get the warranty and I was able to use it.
One thing is its a Tough Camera so given my disposition to simply throw this around my purse, backpack or on my wrist it works.

There is a few hiccups ...I haven't figured out how to work the auto flash stuff and instead of taking pictures of the ground I get photos of the back of people's head. 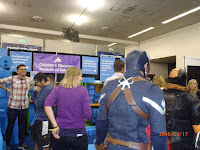 I think I was trying to take a picture of the Children's discovery museum.
eventually I will take great pictures like this

Posted by Patricia Appelquist at 9:38 PM