Great Places to go with DAD!

I admit my fondness memories with my father were when he was driving someplace somewhere over there. Granted, he could drive like a bat out of hell but usually on the weekends there was someplace somewhere to go.
Aside from the Santa Cruz Beach Boardwalk or the Gilroy Valley my dad liked to think about owning a farm. Not just any farm but The FARM. When he was going to manage the station in Oklahoma City he first looked at a 20 acre horse ranch. Unfortunately, PJ and I had other plans and that was head straight back to California as soon as possible. Plus I don't think she liked tornadoes either.
So this coming Sunday here is a few great places to take Dad!

To get away and spend the weekend leave early on Friday and drive up to Fort Bragg or nearby because Father's Day is smack dab in the beginning of the tourist season it will be busy hence why my dad decided to go up to Fort Bragg on a Wednesday in August because we were on our way to Humboldt State for some reason.
The town of Fort Bragg is full of history and Mom and Pop diners that in the early 90's were going for Sale because right after buying the FARM was my dad's version of owning a Diner that served Salmon Balls on Friday Night Blue Plates. ( do not ask ).

If you rather stay away from the ocean then head over to Mariposa  sitting outside Yosemite National Park you can find a lot of things to do in Mariposa because its the only place that has parking now. The town is pretty modern and you can literally take a bus into Yosemite that is way better than driving into the park. ( .also my dad thought about buying a hotel there ...another missed opportunity ).

If crowds are not your thing and you still want to see something with Dad ..Take a Hot Air Balloon Ride with Sky Drifters outside of Sacramento this is a special way to get away from it all and still see it all because on a clear day you can see the San Francisco Skyline too.

Rather not get that high up in the sky? Try Ziplining in the Redwoods just about every park now has a zipline course.

Still too much okay take a tour of the Winchester Mystery House or Hearst Castle then get an ice cream cone because that is what we'd do too. 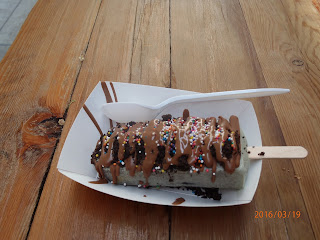 Posted by Patricia Appelquist at 9:22 AM