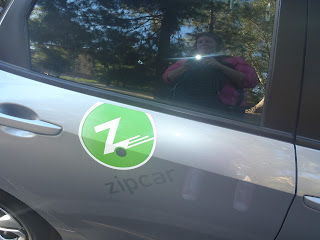 I am BACK with Zipcar we had a little tiff recently but OMG we be good now seriously I don't know what to call it but it seems Zipcar is like the neurotic person in your life where at least once a year you are going to war against each other and calling the lawyers and ITS ON!!

Recently I had to do some errands and I grabbed the Zipcar Sombrero at Stanford and some 360 miles later the love was back on.

One thing about Zipcar you need to know ...usually low mileage relatively new cars are what makes up their fleet so if I want to drive a 2016 Ford Escape with all the bells and whistles it exists ( oh it comes in red too ) this is in addition to sensible 2016 minivans that you can basically move your whole apartment with or take the soccer team to brunch.

The Sombrero is a Honda Civic that went Zoom to my heart except I was stuck in bumper to bumper traffic during the heatwave weekend of the Gilroy Garlic Festival so my trip to do some serious errands that involved avoiding traffic was not too bad because of the great seats and cockpit like of the Honda Civic.

From Highway 101 to the Hwy 1 this car handled like a dream and a lot of oompf too. I was able to put 6 large office equipment for electronic recycling in the trunk so my friends could own the back seat.
Aside from the fancy ( seriously fancy ) electronics hook UP we could play pandora to spotify to Google Music just by swiping left or right on our phones.

My favorite trip is Hwy 17 ... period if I am in a Zipcar you will find me on Hwy 17 at some point and time during my membership reservation its a given. So Sunday morning arrives and where am I ? You guessed it West Cliff Drive. Then I have to return the car and so I head back because honestly I really do not like traffic ...at all. So there I am being a good driver and lo and behold a new Tesla 3 rolls up on my bumper like its commute hour and the driver is not going to do anything but rev his engine at me. The Honda Civic served up a nice plate of good responsible driver on the Tesla that had nothing better to do than sit back and learn how to take Hwy 17 like a Pro and by take Hwy 17 I mean carefully.

That was the thing I loved about this Honda Civic Sombrero ...I felt safe nestled in a cockpit complete with more airbags than political fundraiser and responsive braking system that worked really well ...I had to stop on a dime more than once just because of bumper to bumper traffic ( and a MILLION people being on the road at once ).

The one drawback was from the backseat there were not big cup holders for the huge water bottles we all were carrying.

So if you are able to join Zipcar and you in NorCal check out the Sombrero ...its a nice one.
Posted by Patricia Appelquist at 1:53 AM