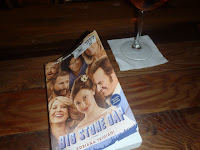 I started out in Palo Alto where it was 105 degrees at 3pm and as per my plan to relax and read a book on the beach I had my book ready.
Big Stone Gap is perfect for the beach and while I tried to enjoy some Rose at Cafe Venetia I was still fighting the heat complete with even a nice cool slice of cake.
After an hour I checked it was just 103 and I needed to move because I was not the only one with this great idea. Fortunately, the book moves too and by moves the reader along too and you get invested early ( or I did ) into the lives of those whom live on a Mountain. 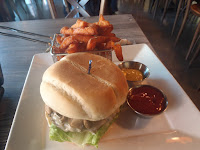 I headed over to Coupa Cafe for more air conditiioning and no wine which isn't bad because they have this burger that is delicious and considering the Heat Wave might be a sign of Hades opening up to take me down I was going to have my last meal one way or another.

While all authors have to jump some kind of shark to move a story along because the holidays are just that a stopgap in storytelling the main character takes  nap and trust me after that burger and wine I wanted to take a nap but not sleep for 10 days.

While the story takes place in 1978 its probably still true today if you were to head up to the Appalachian Mountains you would find a Big Stone Gap that would be knee deep in characters and charisma.

While I had planned on hitting the beach with this book everyone else would be too and what is worse is that it was 103 in Santa Cruz so the beach alluded me once again.
But the book is great and if you do have to sit and read at a Cafe I know of two that would be great to enjoy.

Posted by Patricia Appelquist at 2:40 AM