When one thinks about stuff randomly because they decide to leave social media for a bit sometimes a thought pops into one's brain that is so absurd that it makes sense.
Hence, if Dennis Nedry wasn't greedy or just waited another day we might have our very own Jurassic Park today!

Or Two competing organizations with great attraction of live dinosaurs! Instead the closest we get to having a real life pet dinosaur is kidnapping a Komodo Dragon from an island.

Not to say the least of our troubles is convincing the Puerto Rico Government that three islands be taken over by a conglomerate organization to build a preserve of wildlife is not going to go incredibly smoothly, but still one has to wonder what it would take for dinosaurs to come back and inhabit the earth (forgoing the existing dinosaurs of cockroaches and turtles).

One has to wonder if it is human foibles that caused the fictional tragedy of Jurassic Park or the reality that there is very well a psuedo Dennis Nedry that exists if just to be greedy. The character already had $50K in one bag waiting three days or just for the storm to pass was too much to ask? 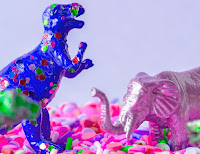 Right now the very essence of the potential for a real life Tyrannosaurus Rex existing in this realm is in the embodiment of the overtly tanned individual that was elected to the seat in the White House in 2016, unsurprisingly one would find such embodiment insulting to dinosaurs everywhere and any place in time.

All because someone was greedy and Dennis Nedry didn't feel loved or appreciated.


I mean does it seem like a bad idea to step back in evolution and recreate a being that for all intent and purpose was basic animalistic qualities that humans have pushed aside in hopes of artificial intelligence saving their meaningless existence from extinction? Too bad that the intelligence is called artificial and not authentic intelligence even a T-Rex would know the difference.

Posted by Patricia Appelquist at 9:33 AM