In an incredible effort to get back into it per se I have to be out there in the public and not stuck behind a computer. This is an effort to avoid marketing friends whisking me away to Conventions and Festivals as Free Labor and Child Care which by the way is not fun.

Hence, I went on a Party Bus for the Battle of the Bay series between the San Francisco Giants and Oakland Athletics.

It was a learning experience but let's take a look instead.

First, its been roughly about 6 years since my last party bus trip that was from Napa so, my expectations are out of proportion with what actually goes down now. 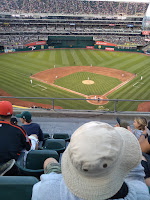 There was a bus. 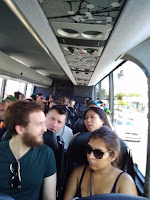 And there was a Baseball seats 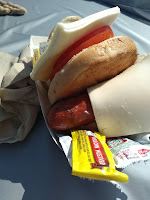 And there was food.

Actually, given my over eagerness had me showing up at Jack's Bar about 3 hours early I should have known better. The Value Seats behind Home Plate are $20 add in transportation on a very nice long bus, alcohol, tailgate bbq and a $6 ticket coupon I got a lot for my total of $110 or so.

here is some video

Overall there are more pictures and maybe I will share them later but for now. Try a Party Bus!

Posted by Patricia Appelquist at 10:09 PM